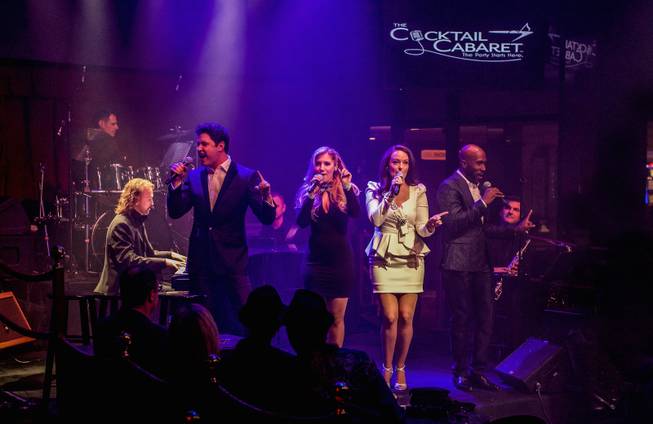 There’s a lot of talent on that tiny stage inside Cleopatra’s Barge when “The Cocktail Cabaret” is on.

It comes as no surprise that a new show dubbed “The Cocktail Cabaret” has taken up residency inside Cleopatra’s Barge, the classic Caesars Palace lounge space born in a different Vegas entertainment era and seemingly frozen in time. But this musical spectacle has a couple notable twists.

First, it’s a 5 p.m. show. The unorthodox scheduling is carefully calculated to fill a void in casino programming, a surprise designed to get Vegas visitors—whether they’re in town for business or fun—to start their night a bit earlier. But more importantly, this cabaret is absolutely crammed with talent. It’s a 70-minute musical blast that’ll leave you wanting more.

“The Cocktail Cabaret” was created by PK Entertainment, a joint venture between Vegas and Broadway veterans Keith Thompson and Philip Fortenberry. Thompson is the talented composer known for his work on “Jersey Boys” and the Composers Showcase at the Smith Center. Fortenberry is the gifted pianist who served as the hand double in HBO’s Liberace biopic “Behind the Candelabra” and he anchors a rollicking band that includes drummer Don Meoli, bassist Josh Jones and sax player Eric Tewalt.

Moving around the stage and the rest of Cleopatra’s Barge are four mind-blowing vocalists: Eric Jordan Young from “Rock of Ages” and “Vegas! The Show,” who miraculously finds time for his regular job as resident director of “Baz: A Musical Mash-Up” at the Venetian; the powerful Niki Scalera, whose Broadway resume includes “Hairspray” and “Footloose”; local favorite Maren Wade (“Pin Up” and “50 Shades! The Parody”); and 24-year-old sensation Daniel Emmet.

The singers soar in solos, duets and group performances of original music and re-imagined standards. Wade sexes up “Girls Just Wanna Have Fun,” while Scalera slays Shirley Bassey’s “Diamonds Are Forever” and Whitney Houston’s “I Have Nothing.” Young puts his Broadway chops to work, serving as the host throughout the show and offering comic relief until he gets his turn to shine on “That’s Life.” The young phenom Emmet thrills with almost every note, singing in English and Italian for a hybrid “It’s Now or Never/O Sole Mio.” Any of these performers—including the astounding Fortenberry—is capable of carrying his or her own show of this size—the Barge packs in 140 for “The Cocktail Cabaret”—but the combination of the ensemble under the veteran direction of Thompson is an unexpected and powerful punch.

Since it’s new, the show is still in the discovery period. But it’s too good to be something you just happen upon; it’s destined to become a destination and quite possibly a reason to bring locals to the Strip. “The Cocktail Cabaret” performs Wednesday-Saturday at 5 p.m. at Cleopatra’s Barge at Caesars Palace. More info can be found at cocktailcabaret.com.